The Metlife Building is centrally located in the core of Midtown Manhattan’s prestigious office submarket, between Grand Central Terminal and East 45th Street. The location is close proximity to the heart of Midtown Manhattan, with direct access to Times Square, Grand Central Terminal and the New York Public Library, and superb views of beautiful Bryant Park. It is an ideal location for anyone looking to rent office space on Park Avenue in Midtown. Transportation to 200 Park Avenue is plentiful, including subway and bus lines, as well as commuter trains via Grand Central Terminal or a short connection to Penn Station.

Tenants at 200 Park Avenue can enjoy fine dining and entertainment at dozens of establishments in the area including La Fonda Del Sol, Michael Jordan’s The Steak House, or grab a beer and burger around the corner at The Beer Bar, to name only a few within blocks of this fabulous Midtown location. For road warriors traveling into the City for work or for those with visiting clients the location is nestled near plenty of four and five star hotels including the Grand Hyatt New York, the Roosevelt Hotel, and just blocks from the famed Waldorf Astoria.

200 Park Avenue offers an array of office space options including the choice between direct lease offices and sublet offices – some of which come fully furnished. You can learn more about how to rent office space on Park Avenue in NYC and the the specific options available at this location below or by calling us at (212) 967-2061.

What this Office Building can Offer You:

Property Details
The MetLife Building is a 59-story skyscraper at 200 Park Avenue at East 45th Street above Grand Central Terminal in Midtown Manhattan, New York City. Built in 1960–63 as the Pan Am Building, the then-headquarters of Pan American World Airways, it was designed by Emery Roth & Sons, Pietro Belluschi and Walter Gropius in the International style. The world’s largest commercial office space by square footage at its opening, it remains one of the 100 tallest buildings in the United States.

The building remains one of the city’s most recognizable skyscrapers. Designed in the International style by Emery Roth & Sons with the assistance of Walter Gropius and Pietro Belluschi, the Pan Am Building is purely commercial, with large floors, simple massing, and an absence of ornamentation inside and out. It has been popular with tenants, not least because of its location next to Grand Central Terminal. It is current opinion[by whom?] that the architecture of the building has been inspired by the Pirelli Tower,[citation needed] built in 1956 in Milan, Italy, which has been a model also for the Alpha Tower in Birmingham (UK) and other similar buildings in Switzerland and Spain. 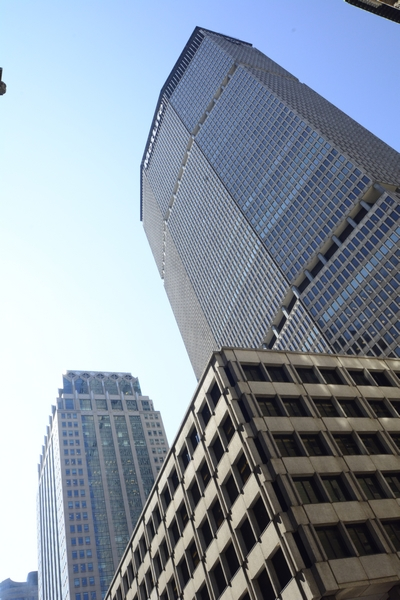