The descriptor of ‘white box finish ’ in commercial real estate is assigned to an office unit that has finished or unfinished four walls, ceilings, flooring, and limited lighting. A ‘white box’ space contains minimal improvements completed on the HVAC, ceiling, pre-prepped interior walls, floor slabs, and electrical outlets and switches. A ‘white box’ space may also be known as a ‘vanilla box’. ‘White box’ does not contain any build-out; the space is essentially an empty shell. The only build-out included in the office is a code-required restroom. The property owner is likely to negotiate the terms for any needed construction.

What does "White Box" mean?
‘White box’ identifiers is dependent on the market and property owner. The property owner has made improvements to the interior of a new or existing space before delivery. Many improvements installed the updated heating and cooling ductwork as well as any other delivery systems for the HVAC. The electrical system is installed including the wiring, switches, and outlets throughout the space. In addition to the electrical system, limited lighting is installed. The walls are most likely unpainted, but finished with drywall. The floor is likely to be concrete slabs. The finishes for the ceiling are chosen based on the market and demand; some are open for a loft-style ceiling or a drop ceiling with tiling. The improvements will include restrooms that meet city codes.

Leasing Specifics
The specifics of a ‘white box’ space is dependent on the property owner, building, and lease agreement. This leads the definition of ‘white box’ to be different for every person allowing you to form a definition to best suit your lease agreement. Some property owners take the risk of omitting the term ‘white box’ in favor of more flexibility in negotiations with a tenant. Including the term ‘white box’ in the lease agreement allows both parties the certainty of what the owner and tenants provides. Omitting the condition of the space could cause miscommunication and confusion between the tenant and property owner. The miscommunication can lead to potential conflict or even worse, lawsuits. This is not a good start of an owner-tenant relationship.

‘White box’ is defined differently to each party and to avoid litigation should be clearly defined in the lease agreement. It is commonly understood that a ‘white box’ space is unfinished or contains only demising walls to separate from the other tenants. The utilities are not always included in a ‘white box’ space as well as finished interior walls, ceilings or floors. This may become quite expensive for a tenant to complete.

Types of White Box Spaces in Real Estate ‘White box’ is term that describes many types of spaces, including retail, industrial, and office space. The property owner can ease the process by having an architect, general contractor, engineers, and other necessary professionals to compile a list of any required improvements for the space. Some items most likely included on the list are doors, ceilings, flooring, walls, lighting, restrooms, plumbing, electrical, fire sprinklers, HVAC and ductwork.

This list attached to the lease agreement eliminates any confusion or miscommunication between the tenant and property owner.

Construction The particular ‘white box’ list of improvements will change from space to space and building to building. All involved parties discuss all improvements during the lease negotiation. An important question to be discussed is whether the electrical will be subbed into the space or into the utility room of the building.

An important distinction to remember is the difference between ‘white box’ and ‘as is’. ‘As is’ is the condition of the existing space at the time of the lease or at a specified date. The tenant is then responsible for finding out what is included in the space and what is not. This works against the tenant and any miscommunication regarding the space will likely favor the property owner. ‘As is’ condition offers the tenant no protections. The tenant should consult with professionals before signing the lease. 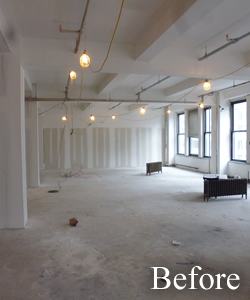 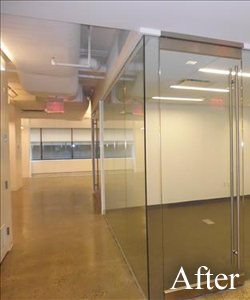 Condition of Space
The conditions of space you are looking at will determine a lot about your potential tenant improvement (TI) allowances, as well as the timing you need to prepare the space to occupy. There are typically three types of space: Gray Box, White Box and Existing/As-Is.

Gray Box or Raw
First, we will talk about “Gray Box”, also known as “Raw” or “Black Box’. This is space that has never been built out and has no or minimum infrastructure (i.e.: none of the following: mechanical HVAC {Heating, Ventilation, Air Conditioning} system, plumbing, and electrical service).

This space requires the most amount of work and time to be ready for move-in, BUT it also receives the largest tenant improvement (TI) allowance and is a “clean slate” to design the best layout with minimal compromises. We typically see this type of space in a professional office building.

White Box
Next, we will discuss “White Box” or “Vanilla Box”. This space may have never been occupied, or has been occupied but had a wide open plan, like a retail shop, or has been recently gutted to “start-over”. The biggest difference between a Gray Box and a White Box is that the white box has the infrastructure in place.

Since infrastructure is a large part of the cost of the build-out, the TI allowance is typically less for these buildings. The space usually requires less time to design and build out, though you do have to work around the existing restroom locations, unless you want to pay to move them, which is not recommended.

Existing/As-Is
The last space, which is the most common, is an “Existing” or “As-Is ” space. This is a space that has definitely been occupied.

Very often we see this space has little or no TI allowance (i.e.: they will replace a low cost item, such as the carpet). Our suggestions for this type of space is (from a space plan versus cost perspective) if you can reuse 90% or more of the existing structural space (minor construction) and all you want to do is finish changes, then this is typically a great deal.

Remodeling an Existing/As-Is space can cost more than building-out a White Box , because you have to rework structure for it to work for your function and flow. If you need some major changes to make it work, you have to weigh the pros and cons. Though every situation is different, I will say that if the space is in the right location and you can cover the costs of a remodel, then it will be worth it. And, in some cases, we have seen the landlord give a generous TI allowance for spaces that need a significant amount of work. 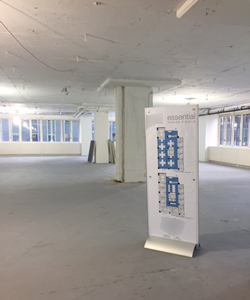 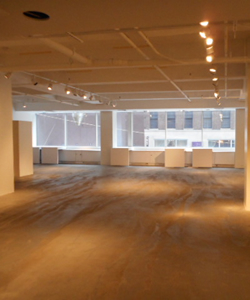 Now that we have tried to explain the different GENERAL types of space, ultimately you need to be very clear with your landlord on what is “included” and what is not included. What we have described is a broad and “Typical” explanation, but it is not the building industry “Standard”. There are so many variations.

Q: Should I use a standard definition of a “vanilla box” in my commercial lease?

A: Yes. Forgetting to define the term “vanilla box” in your lease can lead to confusion and possibly litigation. That’s because “vanilla box” means different things to different people. It may be generally understood that a vanilla box means the “demised” or delineated space, where demising walls separating it from the common areas and other tenant spaces have been constructed. However, it may or may not include utilities and the finished interior walls, ceiling, or floor—items that can quickly get expensive for you if you must finish them.
Searching for a commercial space in Manhattan can be stressful especially when specific requirements are on the list. Whether you want to lease or own the office space, our brokers can simplify the process connecting you the right space to fulfill your needs.

If you'd like more insight or would you would like to secure you're own White Box commercial space in Manhattan, just give us a call and we can discuss all the options at no obligation to you!